Yes. I totally used “NaNoWriMo” as a verb.

For the uninitiated, NaNoWriMo is “National Novel Writing Month.” It’s when writers voluntarily torture themselves during the month of November as they attempt to write 50,000 words in thirty days.

Did you know that Like Water for Elephants and The Night Circus both began as NaNoWriMo projects?

Well, now you do. Cool, right? Let me tell you about my very first NaNoWriMo in 2010.

I shall paint you a scene:

· Newer writer with four kids ranging from ages ten to one (read: plenty of distractions)

· 30k into a new manuscript (furthest ever gotten)

· Terrified of not finishing book

My situation wasn’t exactly a textbook recipe for success.

I knew my target word count for the genre was around 80k, so I took my 30k of unfinished manuscript and decided to “unofficially” do NaNoWriMo to get the other 50k. That meant I needed to hammer out 1,667 words per day in order to accomplish my goal.

Not gonna lie—it was hard to turn off that internal editor. Under typical circumstances, I would have stopped and edited the heck out of what I’d written. But this time, I knew that if I stopped, I wouldn’t reach my lofty goal.

So when that internal editor crept up to whisper in my ear like a literary shoulder devil, I mentally smacked it off and gave it the equivalent of, “La, la, la, I can’t hear you!” I had to get those words in.

That NaNoWriMo ended with me having met my goal—I finished my first book!

I’d love to say that I got it fixed up and it went on to become a bestseller. The truth is that the book is still sitting there on my computer—but I gained something incredibly valuable from that experience: I proved to myself that even though it had holes and lots of messy parts, I could write a book from beginning to end. Talk about a rush!

I also knew that since I’d done it once, I could do it again. And I have—five more times.

Finish that book, no matter how it looks right now.

Perhaps you haven’t gotten your word count in, and there’s no way you can finish before the end of the month—especially if you celebrate American Thanksgiving and are in charge of feeding people. Here’s what I have to say about that: instead of focusing on what you didn’t do, look at what you did. You have more words than you would have if you hadn’t started.

That’s a win, my friend.

Take those words and add more. While challenges like NaNoWriMo can be lots of fun, most writing happens in increments that add up to a whole book over time.

Here are some tips I discovered that can really help to hush up that internal editor:

Only read a page or two of what you wrote previously before you go back to drafting.

You want enough of the story to refresh your memory, but don’t allow yourself to get distracted by editing. You can fix it later. Personally, I allow myself a few small changes, but I only allow myself to go through those paragraphs/pages once before continuing with the drafting process.

Use placeholders.
If you can’t think of a name or place, use a placeholder word (like pachyderm) so you don’t get hung up on figuring it out right then and stopping your creative flow. Then later, you can search for “pachyderm” and fix them. (My good friend and fellow Salt & Sage editor Kimberly Vanderhorst first introduced me to this concept many years ago, using penguins, and it’s one of my favorite tools.) You can also do this for scenes. I use placeholders such as “scene about car chase” or “smoochy kissing scene here,” then power on through.

Often when we’re in the zone of creativity, our brains might think, “Hey! A giant pigeon-rat is just what the park chapter needs!” and before we know it, we’ve gone to add a pigeon-rat to that chapter and lost our forward momentum. There’s nothing wrong with switching to that other chapter, unless we’re constantly getting distracted from moving the story forward. Title and save a document (so you don’t lose it to a computer shutting down when the battery dies—don’t ask how I know), and keep it open as you draft. When you remember that you need to make sure you’ve added enough description to your pigeon-rats, you can jot that down on your edit list to address later. Getting those fiddly bits out of your brain frees it up to keep working on your current scene.

Write what appeals to you that day.

Excited about drafting that fight scene or first kiss? Go ahead—make like House of Pain and jump around. (If you’re now singing “Jump up, jump up, and get down!” give yourself an old-school high-five.)

If you’re stuck on editing a page and you just can’t make that internal editor go to the corner for a time out, try setting a timer and allowing yourself to edit for fifteen minutes or a half hour.

This way you can placate your internal editor a little before you go back to drafting mode. Then they can go back to their corner and glare at you from over their copy of The Chicago Manual of Style.

There you have it! Five tips for hushing up your internal editor so you can finish that book. You can do it! And if you don’t write “the end” by November 30th, keep going until you do! NaNoWriMo is a sprint. Sometimes book writing is a marathon. They all get you to your destination in different ways, and that’s what ultimately matters! Rebecca Blevins is the author of four published books. She has been freelance editing for several years and enjoys helping 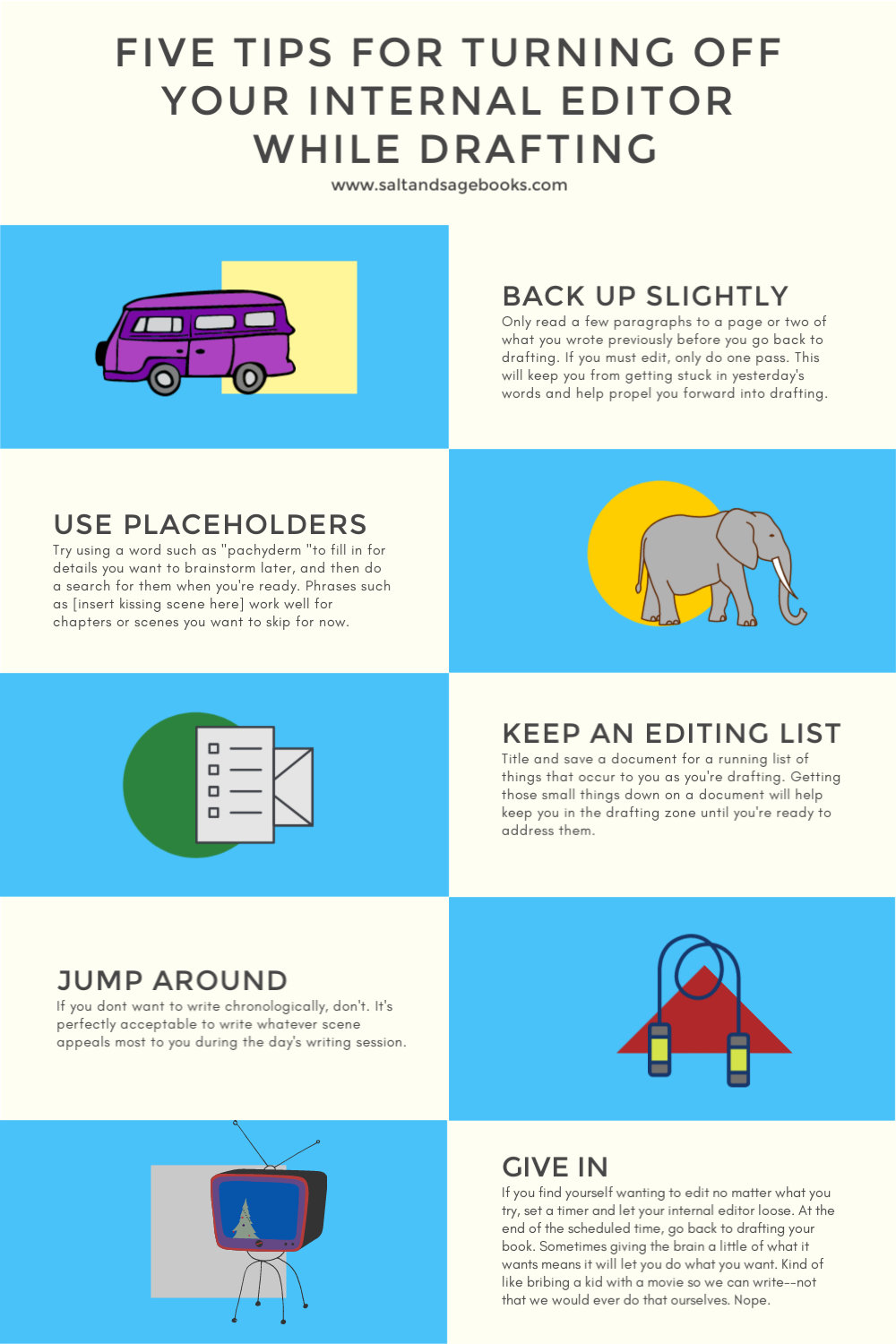 Welcome to the Salt and Sage Books Spotlight series! We welcome you into our creative community by inviting you to meet our editors and expert readers, and to hear a little of their own story, in their own words. We believe that by honoring each other’s voices, we’re able to turn creativity into community and change the world through story. Read More Welcome to the Salt and Sage Books Spotlight series! We believe that by honoring each other’s voices, we’re able to turn creativity into community, and change the world through story. In this spotlight series, we welcome you into our creative community by inviting you to meet our editors and sensitivity/expert readers, and to hear a little of their own story, in their own words. Read More How to Write Autistic Characters: An Incomplete Guide