Today I want to talk about the thing that scared me the most when I first started looking for a literary agent: the dreaded query letter. I not only was jumping into judgment for the first time, but I had absolutely no idea where to start. While every writer has to go through the query trenches on their own, I don’t think other writers should have to go in blind as I did.

After sending a myriad of failed queries, doing my own research, and working as a literary agent intern, I finally feel like I have paved the path for my own understanding of how to write an awesome query, and I invite everyone to walk it with me.

What is a query letter?

A query letter is a short letter (typically an email) sent to an agent that says what your book is about, who you are, and why they should care. It sounds simple enough, but I have spent countless hours perfecting and tweaking my own, and until I started my internship, I had no idea what I was doing.

So what makes a good query letter? 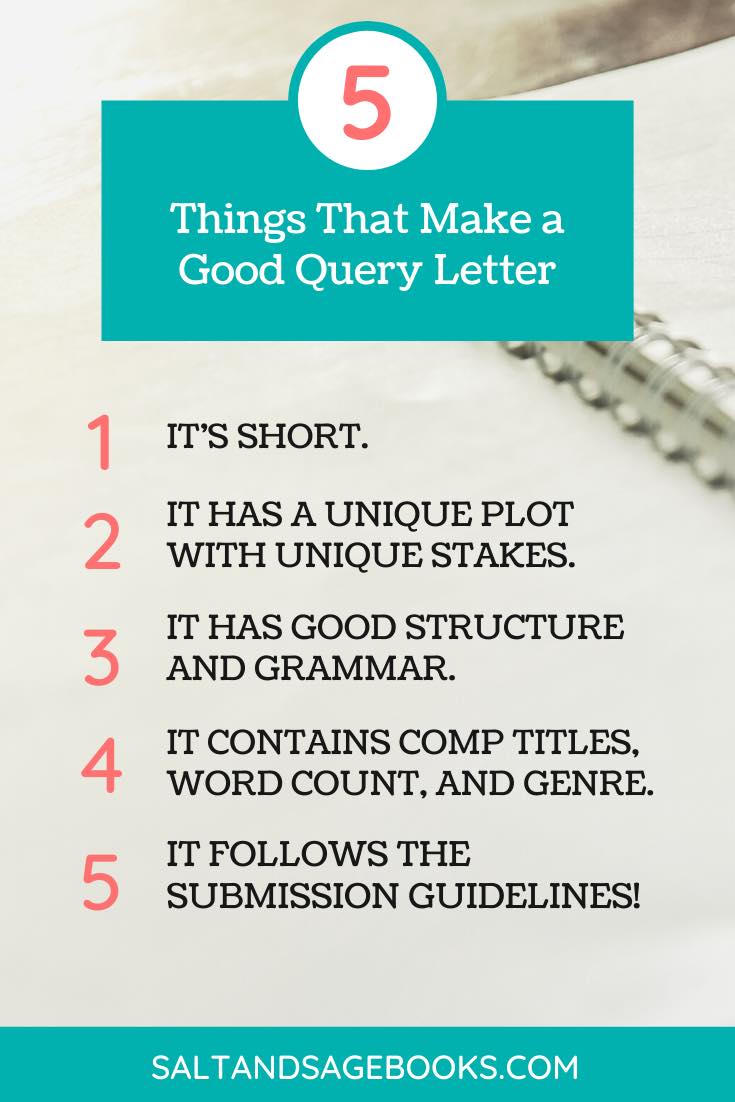 Query letters for fiction manuscripts should be one page. Now, when I say this to writers, I always hear a “but” followed by why they get to break the rules. While with all creative pursuits, some rules can be broken, I would not break this one. Agents read hundreds of queries a week. If your query is too long, you can lose their attention.

2. It Has a Unique Plot with Distinct Stakes

Here is where I see a lot of authors struggle. We know our books so well, its hard to put everything into a neat little paragraph. We tend to overexplain, add details that don’t need to be there, and generally get too stuck in the prose (remember it’s a business letter, not your story).

For people struggling to find the bones of their story, I always give them the same formula:

For example, let’s look at part of The Hunger Games description:

“Sixteen-year-old Katniss Everdeen regards [The Hunger Games] as a death sentence when she steps forward to take her sister’s place in the Games. But Katniss has been close to dead before—and survival, for her, is second nature. Without really meaning to, she becomes a contender. But if she is to win, she will have to start making choices that weigh survival against humanity and life against love.”

Here we can clearly see Katniss wants to protect her sister and reject the politics of the Games + she lives in a world where her sister will ultimately face peril, or she’ll have to participate + she takes her sister’s place in the Games to protect her from dying + she could die herself, but not dying (winning) means taking away her morals.

It’s a single paragraph, but here we see everything we need to see to hook us.

3. It Has Good Structure and Grammar

This one sounds like a no-brainer, but when you’ve spent hours looking through agents and example queries, sometimes our own query letters can fall by the wayside. I suggest waiting at least a day after you write your query before you send it. There are so many little mistakes we don’t notice at the moment, but after a good night’s sleep are so clear.

You also want to make sure you understand the layout of a query. The summary of your story should never be in the first person. You have to write a bio in the query as well, so having your character say, “I’m sixteen” in one paragraph and then having you say you’re a neurosurgeon in the other gets confusing.

While working at my internship, I found queries tended to miss at least one of those things. The query should contain the word count of your manuscript, the genre and age group, and comparison titles for your book. The comparison titles should be relevant books in your genre that were published in the last two years. While it may be cool your book has similar themes to Twelfth Night, unless it’s a rewrite, it doesn’t help the agent see where your book would stand in the market.

5. It Follows the Submission Guidelines!

This one I write over and over again in every blog post about querying. Please pay close attention to this because I have seen so many queries that do not follow the rules.

Remember, your query letter is a business email. If an agent represents you, they are going to work with you for at least a couple of years. They will choose someone who follows their submission instructions. The most exciting part of your opening might happen on page ten, but if they ask for five pages, only send five. If they don’t specify the format, use the standard 12-point Times New Roman font, single-spaced, with one-inch margins.

By following these guidelines, you will have a query letter to be proud of. I wish you all the best of luck on your querying journey!