My grandmother died ten days ago. This is as upsetting as you’d think.

But through the isolation and grief, I recently found a way to reclaim my heritage, identity, and belonging as a Japanese-American. 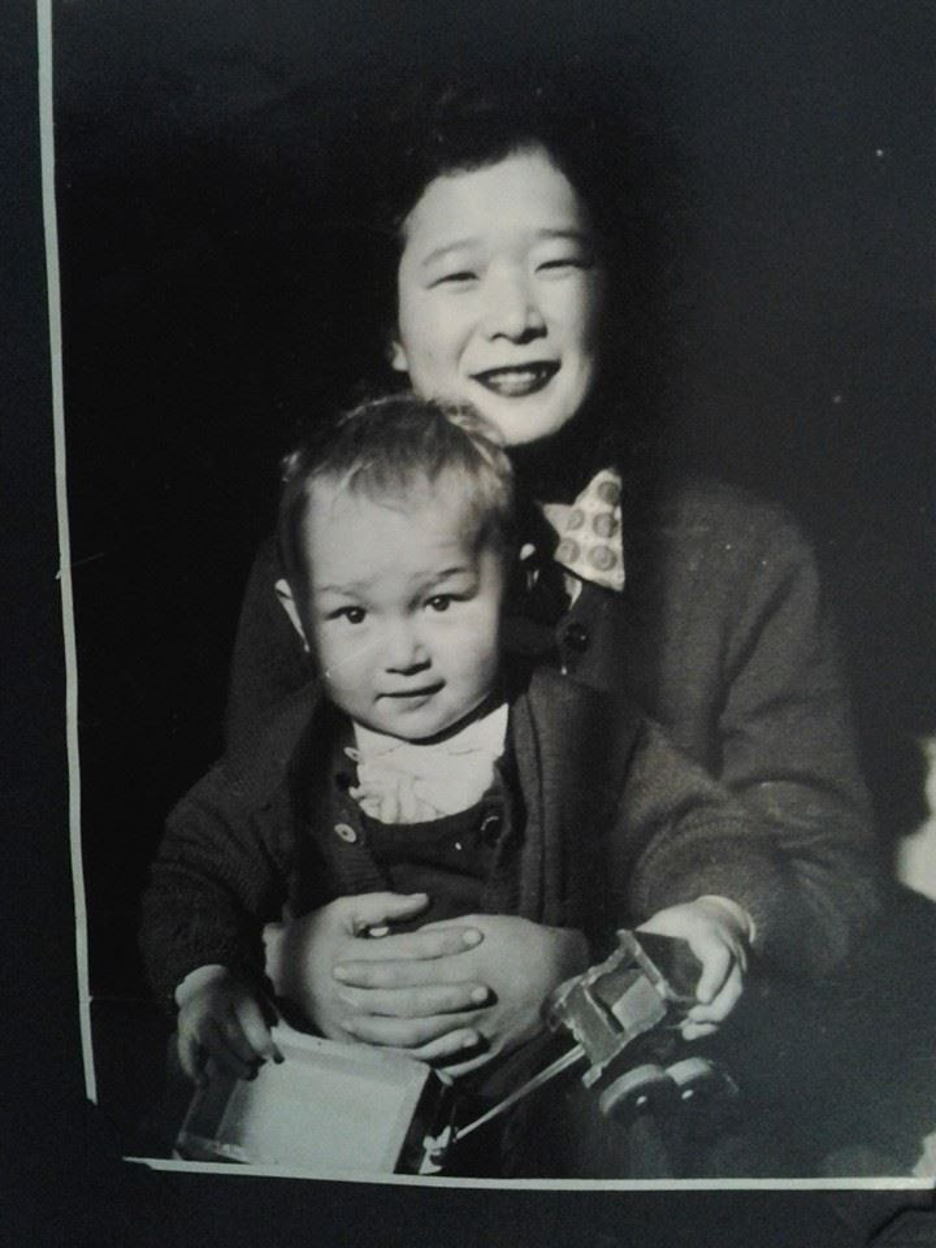 My grandmother, Fumie Suzuki Swenson, was Japanese and married an American. My father, Raymond Takashi Swenson, was born in Japan and lived there until the United States changed its immigration laws to grant citizenship and residency to the foreign-born children of American servicemen. The US had to be persuaded to want us, basically.

My father grew up mostly in the States, with a couple sojourns as an adult in Japan: first, as a missionary, then as a USAF JAG with a wife and three kids. I was a newborn when we moved to Tokyo, and while we were there we had regular visits with my great-grandmother Hisa and great-aunt Kimie.

I acknowledge that I grapple with identity from a place of privilege. I’m part Japanese, and part Scandinavian-American, so I look pretty white, especially to white people. I grew up the daughter of a well-educated family in middle-class circumstances. I have not experienced the same loss of opportunity or safety as many others of my heritage, who look more Asian to American eyes. I don’t get the same pushback that my browner, more visibly Asian relatives do.

I get different pushback. Being mixed race can bring mixed messages. In an ideal world that would mean I’d have more places to belong—and heaven knows I’m determined to create that for myself and for anyone else I can help along the way—but sometimes being two races means having two ways to not belong. All my life I’ve struggled with feeling Not Japanese Enough, Not White Enough—and with being fat, which is Too Much to Be Enough, which really shows the absurdity of the Enough-ness economy in human culture.

This pushback often takes the form of complete strangers asking me, “Are you sure you’re Japanese?” Ironically, this reaction is so common that I’ve found kinship with other hafu (half Japanese) and quafu (quarter Japanese). For instance, a few years ago, I befriended a fellow Sansei at the Portland Bon Odori. We stood outside the Oregon Buddhist Temple, swapping stories about people not believing we’re Nikkei (Japanese diaspora).

“The first thing they say is, ‘You’re not really Japanese,’” she said.

I nodded vigorously. “Me too!”

“And the second thing—”

“‘—Do you speak Japanese?’” we said in unison. Then we grinned at each other. It was amazing to see we weren’t alone. 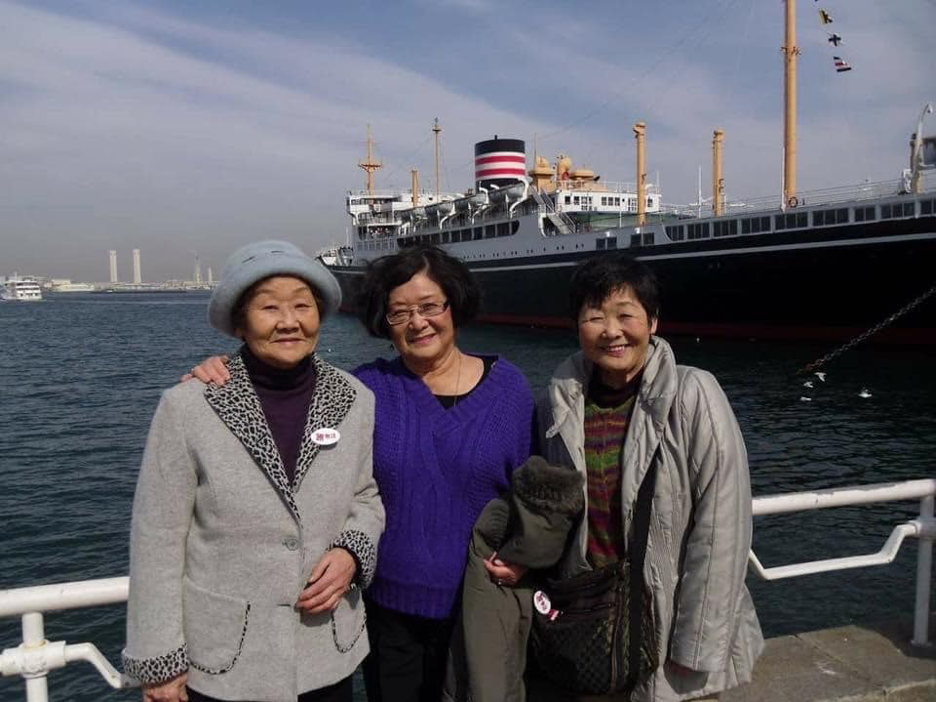 Fumie Swenson and Her Sisters

Community is important to any human. We all need a family, whether store-bought or homemade. But this is especially important to being Japanese, at least as I’ve experienced it as someone growing up in Nikkei spaces. There are things you can’t do, Japanese ways you can’t be, without other Japanese people around.

There are so many ways a community provides belonging to a minority surrounded by a majority, and here are just a few examples: It’s very difficult to eat Japanese food in your home without living near a Japanese grocery store. It’s very difficult to observe holy days at Japanese festivals without being near a Buddhist temple or community center organizing regular matsuri. It’s a lot like playing sports—you need a team.

When I started wanting to improve my cultural batting average, I was living someplace where the being-Japanese equivalent of baseball doesn’t exist. I’m raising my family in eastern Washington, in the rain shadow of the Cascades and in the historical shadow of WWII internment. My region still bears the demographic scars of Japanese-American communities ravaged and replaced by Executive Order 9066.

Deepening my belonging in my heritage meant having to painfully accept the reasons why my children don’t have aunties around to tie their kimono, and why it’s so hard to get shiso or wakame for dinner. It means having to accept that, once exiled, many Japanese-Americans chose to never return, and that we were isolated, cut off, far away from the people who help to make us who we are.

Stories of My Mothers

Two weeks ago, Professor Olivia Meikle invited me to share my hiobaachan’s story on her What’sHerName podcast as part of a Mother’s Day special examining how family history, especially about women, is hard to find and sometimes hard to own. I connected immediately with this because many people are impressed by my samurai lineage, but it was my great-grandmother, the silkworm farm girl from obscure Takayama, who preserved our line.

My grandmother walked through fire when she was a teenager, literally. She and her mother, Hisa, fled American firebombs during World War II, which destroyed their house and their city. I told the story about Hisa and Fumie running through that fire to help our family survive, how they had to find a home far away for a time, how their lives are a testament to how we take the best with us and find some place better to be.

As I spoke about my grandmother and great-grandmother, something happened: my back straightened, my chest opened, and my hands warmed. I felt their presence, strength, and love, these amazing women who lived amazing lives. One of the ideas shared in the podcast is an indigenous belief that time is a circle, and we face the past; what we do now affects what happened then. As I described their flight through fire, I felt burn into my core a blessing of belonging with these women who are alive in me. I felt a calling to do the work of preserving our stories and our line. I belonged. I was thrilled.

Then, that night, my grandmother died.

At a Loss for Words

My grandmother Fumie was my anchor. No matter how far away we lived, she was the one I knew loved me unconditionally. I always knew that with her, I belonged.

Her graveside service was safely and sparsely attended; one of my many cousins shared it on social media. I watched it next to my father on a screen three states away. Her casket was covered in beautiful red flowers and sat next to a big cold hole in the ground.

As my relatives stumbled over our Japanese family names, I grieved one of the biggest losses in my life, felt one of my greatest regrets: not being able to fluently speak Japanese.

Growing up mostly in America means I didn’t retain enough Japanese to converse with my grandmother fluently on her deathbed. As one of the most beloved people in my life lay dying, I was not able to speak our mother tongue.

It looks calm when I type it, the words in a neat line on the screen, but it’s a sentence I can’t speak without suddenly losing my words into a dry sob.

As my whole family watched the service, I told myself the soft, pretty things that I’m good at arranging into comforting bouquets: that the depth of grief mirrors the depth of love. That Obaachan had an incredible life. That there are good deaths, and my grandmother had the best.

I made wreaths of this comfort while still feeling proximity to her grave, feeling keenly how hard it is to connect to someone from six feet away.

My grandmother has been my key to belonging, my pass for the hafu tests that so many white people I meet feel entitled to give me. Anyone looking at her can see she’s Japanese. Looking at me, it’s not so easy. They don’t know I lived in Japan when I was little. They don’t know my great-grandmother loved to give me candy from the yen store, or have me visit her. That my great-aunt pushed me in a stroller on our trip to Kyoto and loved having me play at her house. They are not distant family in the old country, but rather close family who cared for me personally at one of the most obnoxious stages of human development. I have little kids, and I know: that’s love.

At the time of this writing, we’ve all emigrated together into the land of Pandemic, where we live together in isolation. Many of us are learning a really hard thing about isolation: that who we are is affected a great deal by what we do. When we can’t live our usual daily life, we struggle to be our normal selves, and that separation from community can be felt in a rending of self. I don’t know if I feel worse that so many other people feel worse, or if I’m comforted by not being alone in being alone. 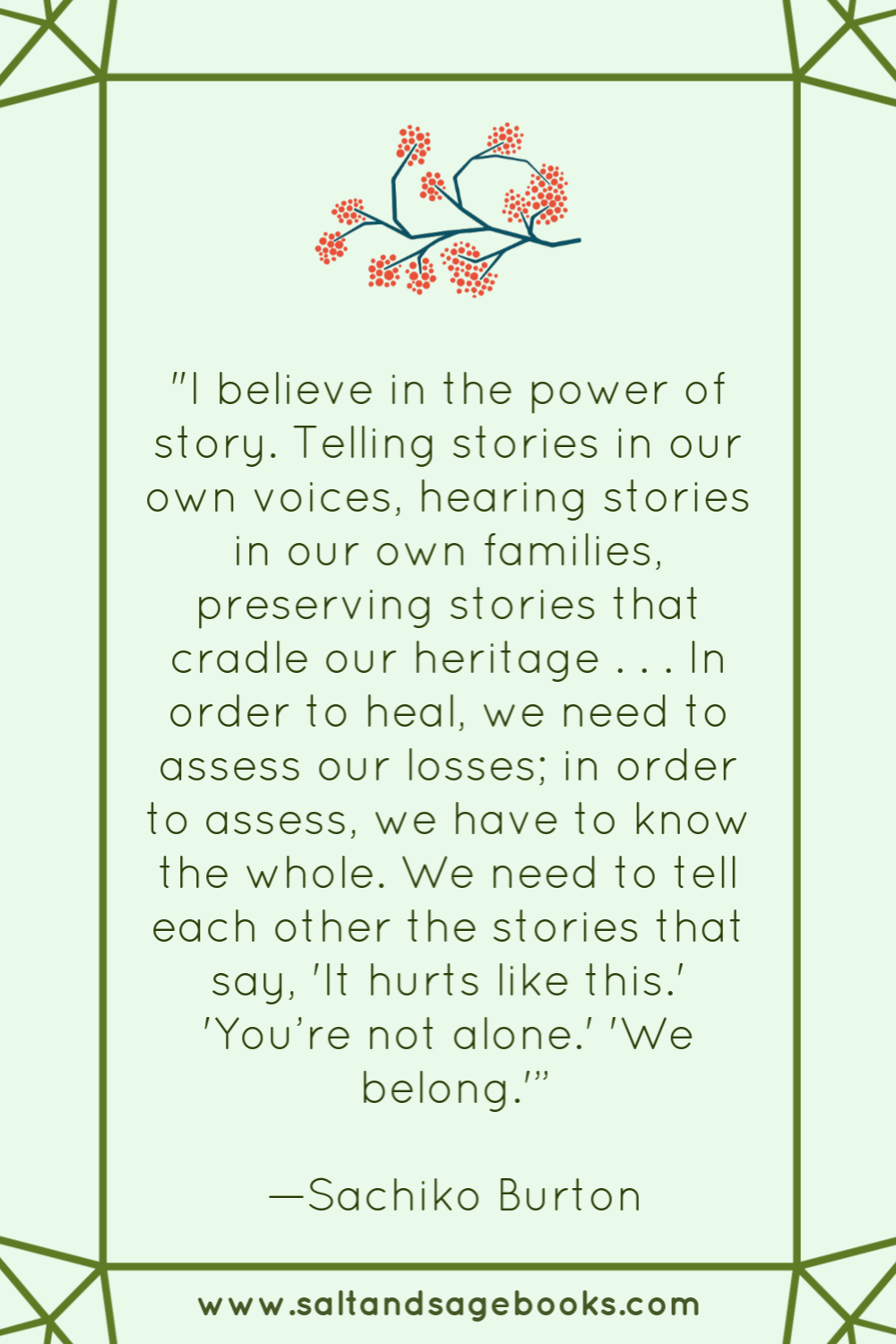 What I do know: I believe in the power of story. Telling stories in our own voices, hearing stories in our own families, preserving stories that cradle our heritage, these are tasks inseparable from helping humans themselves. In order to heal, we need to assess our losses; in order to assess, we have to know the whole. We need to tell each other the stories that say, “It hurts like this.” “You’re not alone.” “We belong.”

I want to give this to others, to help those stories thrive wherever I find them, And, when invited, to help ensure that stories represent real details, in order to give belonging.

The way my grandma lived and told her story made me feel that I belonged. She had unconditional love, and she saw me as “Japanese enough.” The stories of my mothers give me the heart I need to weather storms and the feet to walk through fire. Seeing myself in them is how I go on. 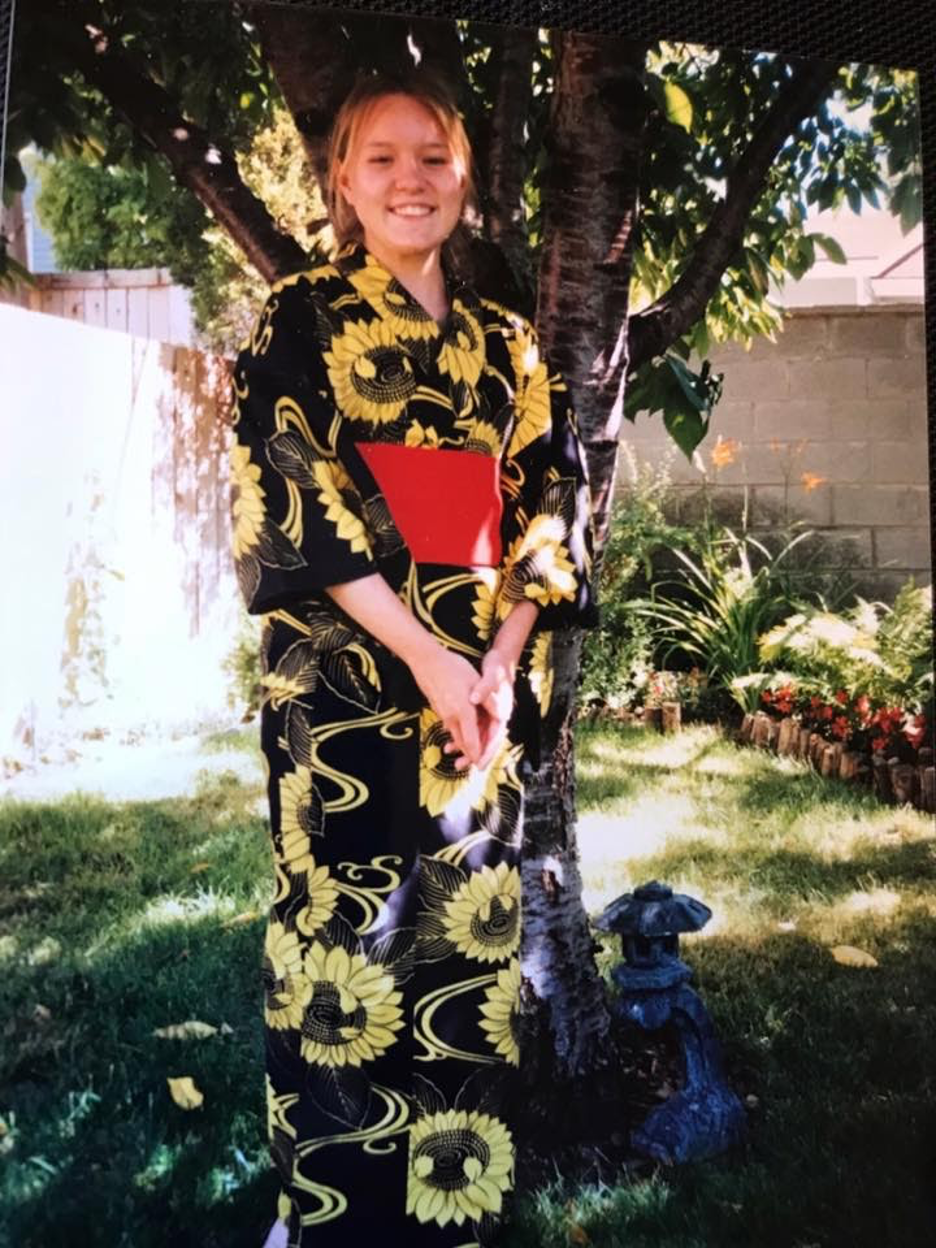 Stories That See Us is an ongoing series of media reviews and/or personal experiences where Salt and Sage Books editors and sensitivity readers share their views about representation. Hello everyone! Welcome to our annual price update. This post has a lot of information, so here’s the TL;DR: New rates are in the table below Prices go into effect on April 4, 2022 All edits now have a baseline 4-week turnaround Salt and Sage Books is turning three this year! Read More