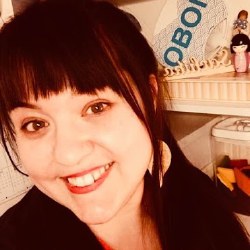 Sachiko is a Japanese-American with an insatiable appetite for good story. She understands character motivation on a deep level and can help you dig deeper into your character than you thought possible. Best of all, she’ll do it with her trademark enthusiasm and deep-heart kindness. Plus, if you need someone to spread punfetti through your manuscript, Sachiko has a party cannon for that.

Sachiko grew up in the Japanese-American community, both in Japan and stateside, and is the daughter of a Japanese-born, fully fluent father. She’s worked as a sensitivity reader with multiple authors, illustrators, and game designers, including Penguin, Asmodee, Abrams Books, Choice of Games, and Harper Collins.

Sachiko loves sensitivity reading, but she’s also a fan of developmental edits. Whether your story has character problems or plot holes, Sachiko always finds the right questions to ask to guide you to a better story. She particularly loves world building and character motivations.

Sachiko has yet to meet a genre she didn’t like, but she will absolutely make you katsu if your story has megafauna.

If she’s not reading or writing, Sachiko is probably fostering kittens and forgetting to give them away, working magic over the grill, or practicing yoga to connect to the divine feminine.

A masterful punster, don’t be shocked if your line edits contain some funny treats.

Her favorite books are DUNE by Frank Herbert and TO SAY NOTHING OF THE DOG by Connie Willis.

I hired Salt & Sage for a sensitivity read on my current manuscript. The entire process from initial contact to receiving feedback was great. The feedback was very helpful, both with specific details and also referring me to other resources for additional research. I would highly recommend Salt & Sage to all my writing friends. Thank you for such a wonderful experience!

I came to Salt & Sage looking for a very specific assist with a screenwriting project involving my Japanese heritage and culture and was just stunned by how helpful Sachiko was.